3 Parts Of Your Game That You Need To Work On

3 Parts Of Your Game That You Need To Work On

Most jiu-jitsu students need little encouragement to work on their favorite submissions. Most jiu-jitsu addicts fell in love with the art and sport when they learned some submission techniques that actually worked in rolling. Then they were hooked!
But we know that submissions are actually only a minor part of a jiu-jitsu match between 2 opponents of comparable skill and experience. Most tournament matches for example are contested in who can pass the others guard and who can maintain and attack from their guard. I’ve observed black belt matches at the world level where not a single submission was attempted the entire 10 minute match. Are these black belts deadly with their submissions? Of course! However, neither competitor was able to secure a dominant position in order to attack as their opponent made sure not to surrender a position.
If this is the case and there are other important areas of our game, what should jiu-jitsu students be working on if merely drilling triangle chokes and arm bars are not enough?
Here are 3 important areas of your game that are often overlooked. Analyze your own game and it is likely that one or all.of the following areas could use some focused attention to bring them up to the level of the rest of your jiu-jitsu game.
1) Guard retention. Easy to overlook and not as easy to identify
specific 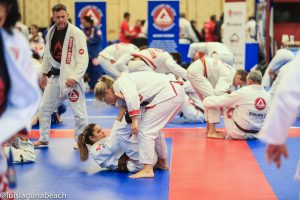 techniques as the submissions or sweeps from the guard. But if you can not control your opponent in your guard and from  passing your legs, you will never get a chance to attack with your favorite triangle.
Watch black belts in competition and you will think their guard is 99% passed and they will quickly Granby roll back to guard or secure a hook out of nowhere and restore the guard.
You need to drill the guard retention moves before they will become instinctive in a match. Learn how to make hooks, use grips and use hip movement to retain and replace your guard.
2) Takedowns. Jiu-jitsu players can neglect their takedowns without thinking much about it because the majority of rolling in bjj class starts with bumping fists from the knees and going immediately to ground work. We see competitors in tournaments not even attempt a takedown, deciding to pull 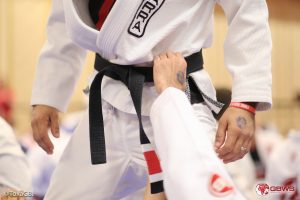 guard as soon as they get a grip.
And let’s face it: training takedowns is just plain hard work!
Competitors looking for any edge against tough opponents may find their takedowns to be the difference in a closely contested match. World Championships have been won by 2 points from a takedown.
To have a complete jiu-jitsu, you must have a basic knowledge of a few of your favorite takedowns and the confidence that you can make them work.
3)  Grips. We don’t think a lot about grips when we first start jiu-jitsu. You just reach out and grab whatever part of the gi that we can get and go right into our moves. 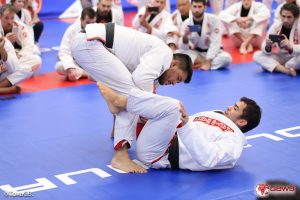 The more you experience you gain in jiu-jitsu, the more significant grips and breaking your opponents grips will start to become. Watch Olympic level judo fighters furiously work to get their preferred grips for their best throws. Watch black belt guard passers immediately break the sleeve and collar grips of the guard they are working to pass. A single tactical grip can be the deciding factor in a match.
The next time you are passing guard, pay special attention to your opponents grips and notice how they are employing those grips to break your balance and tie you up. You need to start paying attention to the grip fighting aspect of jiu-jitsu.
What part of your jiu-jitsu do you feel needs the most work?
See also on Gracie Barra : Tournament Guard Passing
Copyright GB Online Digital Inc © 2019. All rights reserved

Select a course first to display its contents.

No available contents for

There are no free, paid or coming soon courses in your school yet.
Why don't you create one?

Oops, your school's owner is working hard preparing the courses for you.

Oops, you haven't created any courses yet.

Wouldn't it be a good idea to create a course?

No blog posts found in your blog. Why don't you create one?